Boiler Kettling: How to Detect and Deal With It 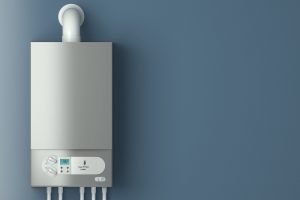 Boilers are often cited as being among the most stable heating systems on the market. They’re far less likely to develop issues than most other kinds of heating systems, owing mostly to the fact that they have far fewer moving parts than most heating system types. However, that does not mean that boilers are somehow immune from developing problems. One of the most common kinds of boiler problems is that of kettling.

Kettling is most easily identified by the presence of a deep rumbling sound while the system is operating, like a giant kettle. It’s caused by water becoming trapped in the heat exchanger for longer than it’s supposed to be, causing it to boil and evaporate. This may come as a surprise, but most boilers are not actually designed to boil water. As water evaporates in the heat exchanger, it expands many times over. This puts pressure on the pipe that it wasn’t designed to deal with. This is what creates that deep rumbling sound, as the heat exchanger struggles to contain the steam.

Short term, kettling will seriously hinder the boiler’s ability to heat the home. In the long term, though, the consequences are much worse. Theoretically, if kettling goes unchecked for long enough the pressure can build to the point where the heat exchanger will rupture. If that happens, you’re probably going to have to replace the boiler and pay a substantial amount in water remediation costs. It probably won’t happen, though. Most modern boilers contain safety features that will shut the system down before any serious damage is done. Still, that leaves you with an intact but non-functional boiler until you get the system fixed.

How to Deal with It

Typically, what actually causes water to become trapped in the heat exchanger is limescale. This is when hard water causes mineral deposits to form in the pipes, restricting the water flow. In the short term, you can solve the issue by having a professional flush out the system for you. If the lime scale is advanced, it might need to be manually scraped out. This is only a temporary solution, though. If you want to permanently prevent the scale from coming back, you are going to need to have a water softener installed in your water line. This will prevent hard water from getting into the boiler and causing issues, which should permanently resolve the problem.

So, if your boiler is kettling, don’t wait for the issue to completely cripple your system before acting. Make sure that you call for repairs as soon as possible to restore your boiler to proper condition, and prevent yourself from having to pay significantly more in repair costs later on.

DB Heating & Cooling, Inc. provides a full range of boiler repair services in Bergen County, NJ. If you suspect that your boiler is kettling, contact us today to schedule an appointment with one of our experts. We’ll make sure that your boiler serves you well for many years.